... Where fear and vulnerability are replaced with canine support and love

Helping individuals with physical and mental health challenges with the aid of uniquely trained service dogs. 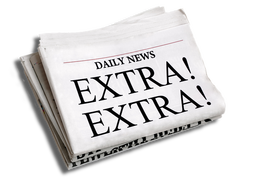 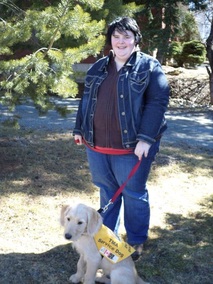 Lee and her puppy in training, Thomas.

Blog article written by Olga Trujillo, a lawyer who is dealing with Dissociative Identity Disorder (DID) in Wisconsin, about TMA Service Puppy in Training Thomas and his handler L. Lee Ramey.

Day Care Center Opens its Doors to the TMA 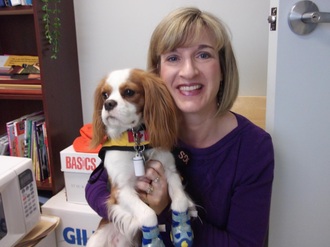 After a morning meeting with the Director of the center, Mary Ellen Shatford,  extended a very heartfelt warm welcome to the little one year old puppy, to come into her building at anytime to train around the children for as long as his Handler wishes.

Faces of young children lit up when they saw the small dog, and in turn, his swishy tail wagged excitedly seeing them.  While it is wonderful little Jaydin loves children (and they love him) it is very important he learns how to ignore them when he is working.  That is what his training will be about when he 'goes to school' at the day care center. In a way, the children will be helping to train him by just being the rambunctious, bouncy fun loving little balls of adorable energy that they are.

It truly is a wonderful opportunity for everyone involved.  We are so grateful to Ms. Shatford for taking an interest in the program.

Who's the TownCryer submitter who thinks she knows how to train dogs?
August 2011 issue of TownCryer News
By: Karen Sibley

You've read her articles in TownCryer News, but what does she really know? Is she the right person for YOUR dog? Can you trust the tips she gives? Who is Rhonda Langille?

Rhonda Langille, of Tatamagouche Nova Scotia, has dedicated her entire life to animals. She has fostered many abandoned animals, both domestic and wild, and helped place lost pets with educated pet owners. She's done numerous speaking engagements at schools to promote pet ownership and proper interaction between children and their pets.

Rhonda is a Canine Behavior Specialist. Part of her training included private lessons from Charles “Chuck” Eisenmann, trainer of the seven dogs used in the 1960 series “Littlest Hobo”.

For over 35 years, Rhonda has been working with and training dogs. One of her specialties is preparing puppies to become true kids' dogs. She has an extremely strong belief that if you are bringing children and dogs together you must ensure that it is a good union and this can only happen if the dog is friendly, forgiving, gentle, and tolerant of children.

As a teenager, Rhonda educated Timi, who performed in fairs and exhibitions throughout Nova Scotia and as a canine clown at children's birthday parties. Timi also gave shows for local childrens' groups and appeared on TV commercials. With Rhonda's training, Timi responded to over 110 vocal commands and 95 hand signals. She became known as “Timi the Wonder Dog” when she performed on the Christmas Daddies Show.

In 1981, Rhonda published a book called Trained Dogs Make Good Citizens, a step-by-step training guide for dog owners. She was writer and columnist of the Truro Daily News column Dear Max, through which she responded to readers' inquiries about dog training.

Rhonda is a Government Certified Master Dog Trainer. Master Trainers have the knowledge and skills to successfully train any dog to any level of service. One of her specialties is training Service Dogs to help improve the functional capabilities of persons with physical challenges and/ or individuals living with mental illness, including post traumatic stress disorder.

These dogs include: Mobility Task helper dogs for wheelchair bound individuals; Signal dogs for the deaf and hearing impaired, Paramedic dogs for individuals who suffer from mental illness; Medical Alert dogs for various unique physical and chemical challenges (including peanut and chemical sensitivities); and Autism Service dogs that are trained to alert the handler of certain behaviors. Rhonda also trains Seizure Alert and Response dogs that alert the handler to oncoming seizures and are trained to respond to those seizures after they occur by helping and/or getting help from others.

Rhonda was featured on the CBC series Land and Sea educating a service dog puppy. As well, one of her working task helper dogs was featured. She has owned and operated a canine boarding kennel and is adept at re-training and rehabilitating behavior problems in dogs. She has experience with Canadian Kennel Club obedience trials and shows and has trained working security dogs and tracking dogs.

Individuals who receive Rhonda's Service Dogs gain a new sense of independence and confidence that enhances their lives immeasurably. Joey Outhouse, of Digby Nova Scotia, is an incomplete quadriplegic who must rely on his wheelchair for transportation and has limited use of his hands and often had to rely on friends to help him with daily tasks that most people handle with ease. When Joey contacted the Canadian Paraplegic Association seeking some form of assistance so he could become more self-sufficient, he was referred to Rhonda. Joey's life changed immensely upon receiving Jack, a black Labrador Retriever trained by Rhonda to meet Joey's needs.

Joey says, “For the twelve years I had Jack, he made my life much easier on a daily basis. He was such a wonderful service dog. He would pick up money, my drinking glass, clothes – anything that dropped. No matter where he was in the house, if he heard me drop something on the floor, he would come running and pick it up and give it to me. He opened and closed the fridge door for me, turned the lights on and off, opened doors for me to go through, and then closed them behind me. When we went to the grocery store, he would take food off the shelves and pass it to me. When it came time to check out, I put the money in Jack's mouth and he would pass it to the cashier. He would take dishes off the table and put them in the sink for me, remove clothes from the dryer and even help me take off my pants when I got ready for bed.” Joey goes on to say he had Jack for 12 years, but when the dog was 14, due to his declining health, he had to put Jack down. Joey adds, “I would absolutely recommend one of Rhonda's service dogs for anyone who lives with a disability.”

Rhonda, founder of Therapeutic Medic Alert Service Dogs, is now breeding, raising and training a fleet of service dogs to meet the needs of mentally and physically challenged individuals in her blossoming business. At present, the majority of Service Dogs come from Ontario and the United States. These organizations require that a handler of a Service Dog must be able to prove he/she is financially able to care for the dog.

Rhonda is in the process of starting a foundation to help with the cost of funding her Service Dogs. A special fund is being established for the purpose of providing financial aid to anyone who is facing financial challenges. With this fund, monies will be allotted for caring of the Service Dog, including dog food, veterinary care, and grooming for short term or, if required, the life time of the Service Dog.

Patsy Hawbolt of Halifax, is the mother of a mentally and physically challenged daughter as the result of a car accident. Hawbolt says, “Rhonda is an extremely gifted person in that her relationship with dogs and being able to train and handle dogs for use of disabled people in Nova Scotia would be such a benefit for all physically challenged in our Province. It would put Nova Scotia in the forefront of training such intelligent dogs instead of Nova Scotian's having to rely on Ontario trainers to do a job which can be done here if the funding is made available.”

Philippe Isler, a registered psychologist in Nova Scotia says, “The program that Rhonda Langille is suggesting is a remarkable idea. Not only would these service dogs be very helpful in assisting people to function better in the world and therefore be more productive and happier, but I would expect the people benefiting from this would also be benefiting from a psycho-therapeutic effect, which could contribute significantly to the psycho-therapeutic process as a whole, and to the person's recovery. While the training of service dogs is not inexpensive, when looked at comparatively to the expense of a treatment program that would provide the same type of supports, I suspect it would turn out to be extremely cost-effective.”

Rhonda still enjoys training and rehabilitating dogs as pets and she is more than qualified to teach your dog just about anything - from learning to not bark incessantly, to... yes, even clearing your table of dirty dishes! Rhonda can be reached by email at rholang@inbox.com or by calling (902) 657-0092. 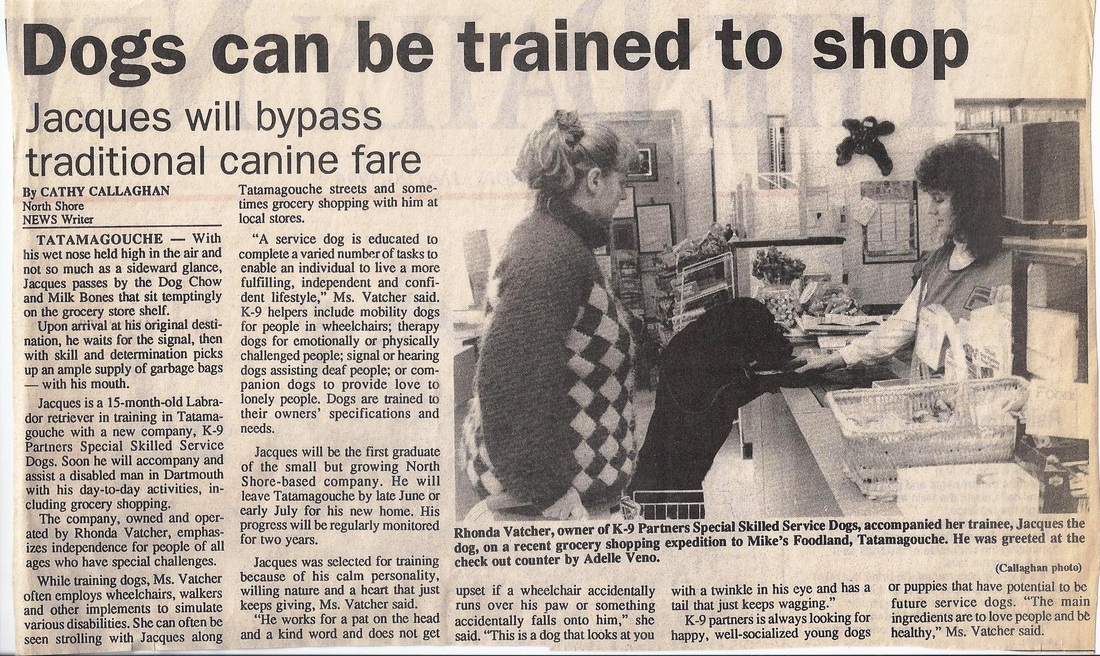 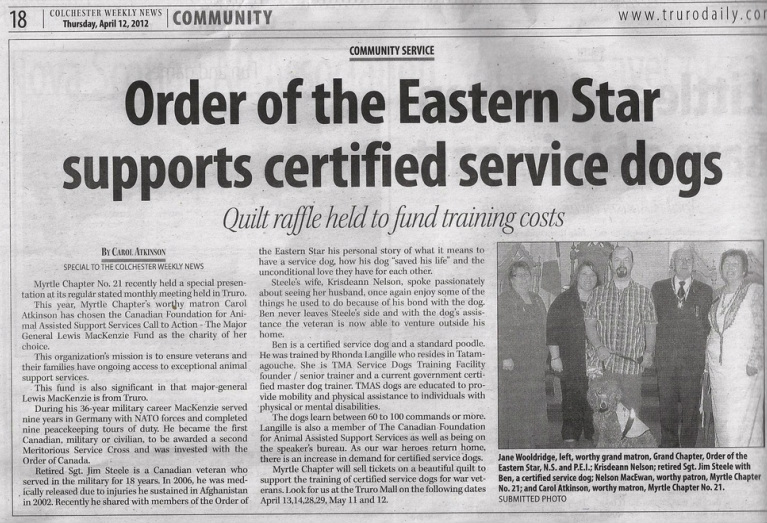